The streets shimmer with heat. The incessant drone of cicadas mingles with the engines and sirens of nearby traffic.

The car is loaded. Your family is eager to escape the city, each one envisioning the rewarding experiences that await.

Campfire Memories is a GMless game about a family going camping, facing unpleasant experiences while in the great outdoors, and then looking back on those difficulties fondly.

Players create a family, composed of adults, children, and dogs, filling them out with goals and resources they bring to the woods with them.

While camping things go wrong, as they do for everyone. Weather turns nasty, equipment fails, wild animals appear at the worst possible times. How does the family react?

After the trip is over, the family has time to reflect on their experiences. What did they learn? What connections were formed or strengthened with the other members of their family? What was valuable about even the worst events?

In order to download this game you must purchase it at or above the minimum price of $7 USD. You will get access to the following files:

More Ways to Get the Game!

Support this game at or above a special price point to receive something exclusive.

Want to play Campfire Memories but are unable to due to financial hardship. Claim a community copy and enjoy! If you like it, a rating or review would help me out.

Want to help make more copies available? For every copy of the game purchased at full price, I'll add another community copy.

Get a printed black and white copy of Campfire Memories for your shelf. A cute  4.25" x 5.5" pocket book format with thick, nice paper. Shipping restricted to the U.S.

Zine excluded from any sales or bundles.

Includes a PDF copy of the game! 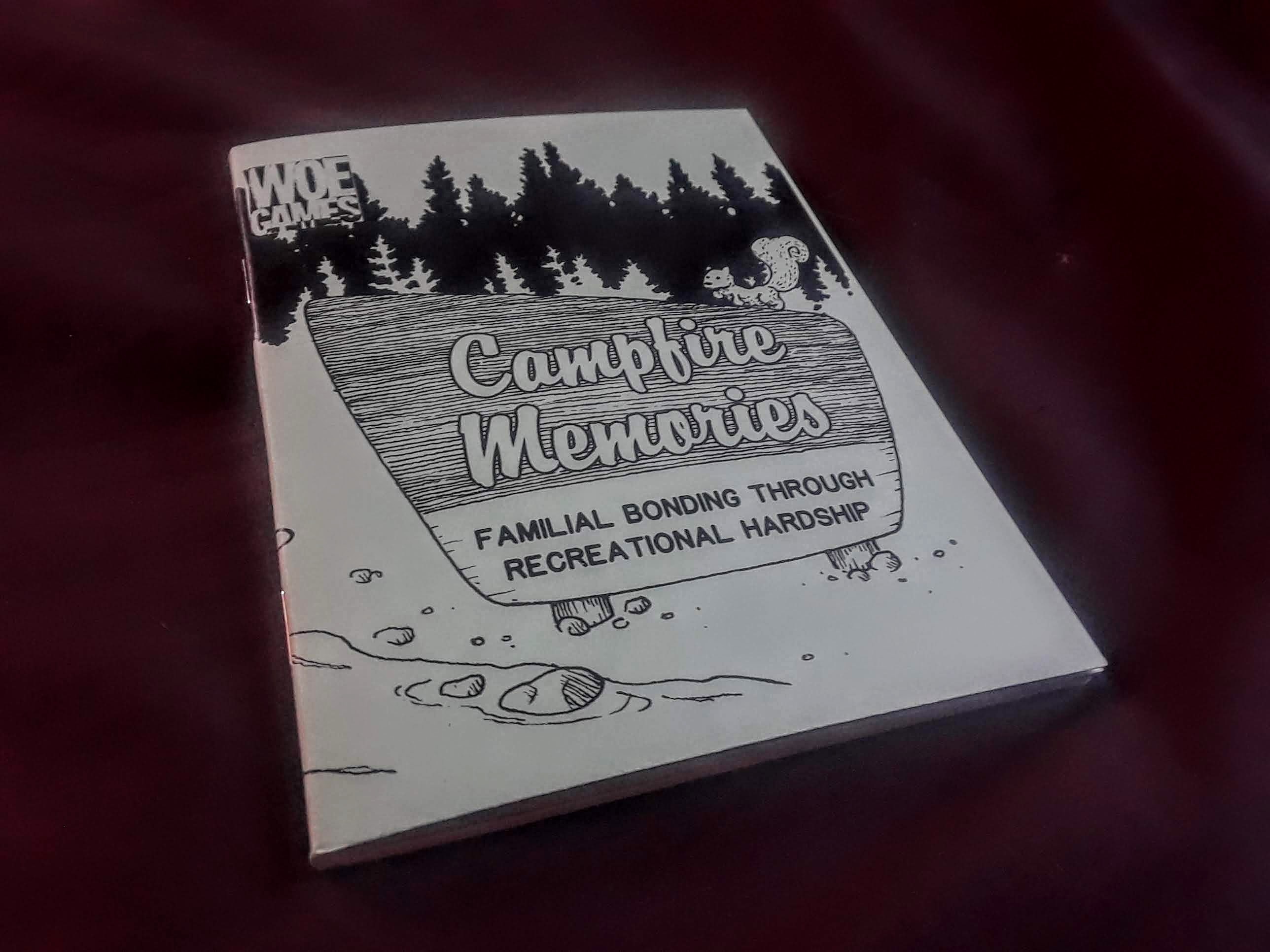 Wasteland of Enchantment Games1 year ago(+1)

When I was planning the Zinequest Kickstarter for this game 2 years ago (gosh), I added a Box of Leaves tier that entitled the highest level backer to a copy of the game handwritten on dried leaves. But I didn't really expect anyone to claim it!

However, someone did and then that someone was very patient with me while I collected and dried 204 leaves.

So now this is a thing that exists in the world.

To my knowledge, there has never been another zine that has been released on leaves. 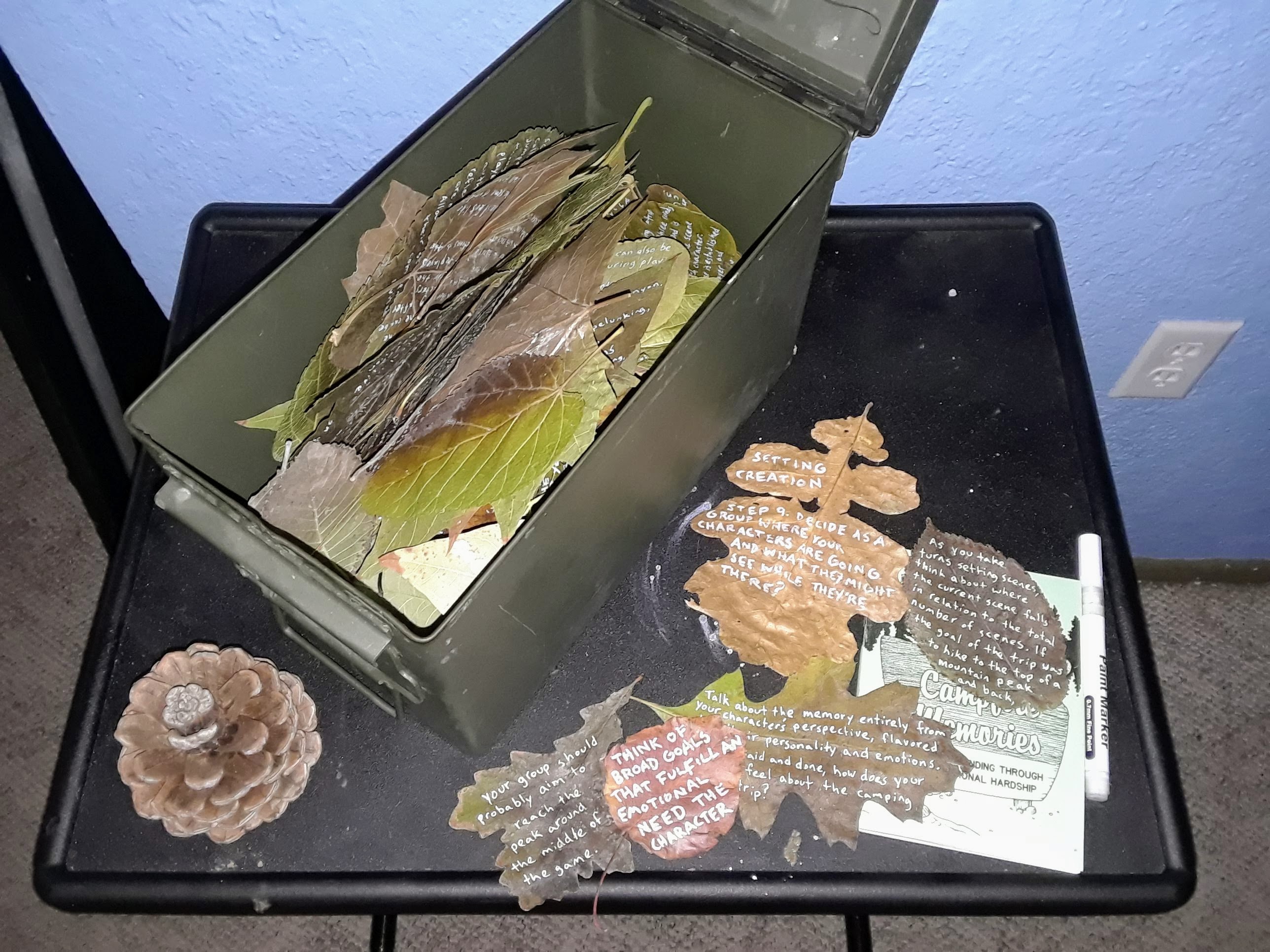 Campfire Memories is a trpg about disastrous camping trips.

Specifically, it's about how the natural state of a family camping trip is a disaster, and how honestly that's kind of okay.

The PDF is 26 pages, with a pretty easy to read layout that's just a little text-block heavy. There's also a ton of cute, whimsical, and clever custom illustrations that add a lot of charm to the book.

Play-wise, Campfire Memories is GMless and largely focused on humans vs nature rather than humans vs humans themes. The game specifically tells the players not to dig into conflict between PCs and that the PCs can't die as a consequence of any event in-game, and this helps keep the game fun and light.

Safety tools are also provided, and they give pretty good coverage for possible issues. There's the opportunity to pre-declare stuff you don't want to encounter, to modify stuff you weren't expecting to encounter, and to reach out to players to make sure everyone's alright.

Character creation is simple and gives you the option to play as an adult, a child, or a dog---which is now my new favorite loadout of character classes. Each class has access to different tools, and they all do dramatically different things. Gear can be used for bonus dice. Skills can be used to bump up existing die rolls. Wonder can be used for automatic successes. Skills can't be taken from you, but Gear can, and Wonder is lost the moment it is used.

The dice system is likewise very simple, with one player rolling a d6 against an obstacle set by another player. A 6+ is an uncomplicated success, and anything else gets a bit messy.

Every player is guaranteed screentime, and every player is also guaranteed narrative development. After everyone's gotten a scene, the camping trip ends and everyone gets a scene with their character later in life, reflecting back on it. It's a nice nostalgic note to finish a cozy game with, and I dig that it's mechanically built in rather than left optional.

For GMs and new players, Campfire Memories provides a good set of resources at the back of the book. There's advice on how to hack the system, a handy SRD, and the writing throughout is clear and easy to understand.

Overall, if you like cozy games about family and small-scale, natural adversities, I think this is a really cool title and it's worth checking out. If you're looking for something emotionally exacting, violent, or competitive, this isn't really that and you'll need to look elsewhere.

Interestingly, when I ran it for my monthly teen group at the local library, they turned the story into a full-scale disaster movie.
I believe we were camping on a tropical island as part of a corporate team-building retreat. There was a massive volcanic eruption.

It was definitely a stretch for the system and not one I'd recommend but it still supported a cohesive story. The game did much better than I expected.

But, yes, please play this game for a low-stakes emotional tone! 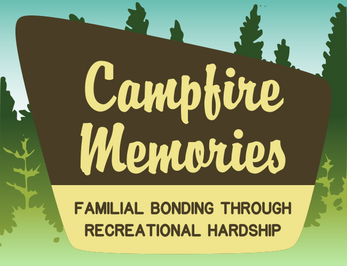