Blood and Milk is currently in development (and very early in that process). The game's mechanics are still kind of a mess and a lot text that explains how the game is supposed to work is missing. However, everything that does exist for the game is freely available. If the game sounds interesting, you are welcome to look through it (or even try to run it, if you're feeling brave) and give some feedback!

In the future, a finished version of the game may have a price tag attached.

Following the death of the Vagrant Prince, the Sun Queen abandoned her verdant kingdom to hunt down the her son’s killers. She was accompanied by an army, hardworking folk of the Garden Valley swept up in the wrathful crusade of their burning queen. No one returned.

The Moon King remained in the Palace of Mist, a broken man overseeing a broken land. A pale and mournful echo of his former self, he was incapable of action when the demon hoards descended on the once-beautiful valley. The remaining citizens live in a waking nightmare. Anger and grief are superimposed, indistinguishably, with the corrupting actions of demons.

You are a member of a brave new sisterhood, warriors and mothers, determined to save you home. You must cleanse the evil influences from the valley and sooth the pain that remains if there is ever to be life in this place again.

Blood and Milk is a tabletop RPG for 3 players and a GM. It's a game of relationships, empathy, and difficult decisions.

It features a detailed session zero, during which the protagonist characters and the village are generated. The locations, supporting characters, and relationships tying all of them together provide a firm foundation for the rest of the game.

The main body of the game functions like an investigation as the protagonists suss out the nasty problem currently plaguing their town. Potential emotional, social, and physical consequences to various solutions need to be discovered. Every solution is going to be messy. It's a game where victory is never absolute and always requires self-sacrifice.

But, after all the pain and toil, maybe the protagonists will be able to bring their beloved home one step closer to peace and health for everyone living there. 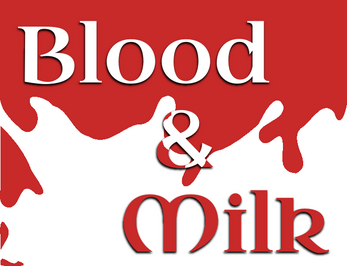